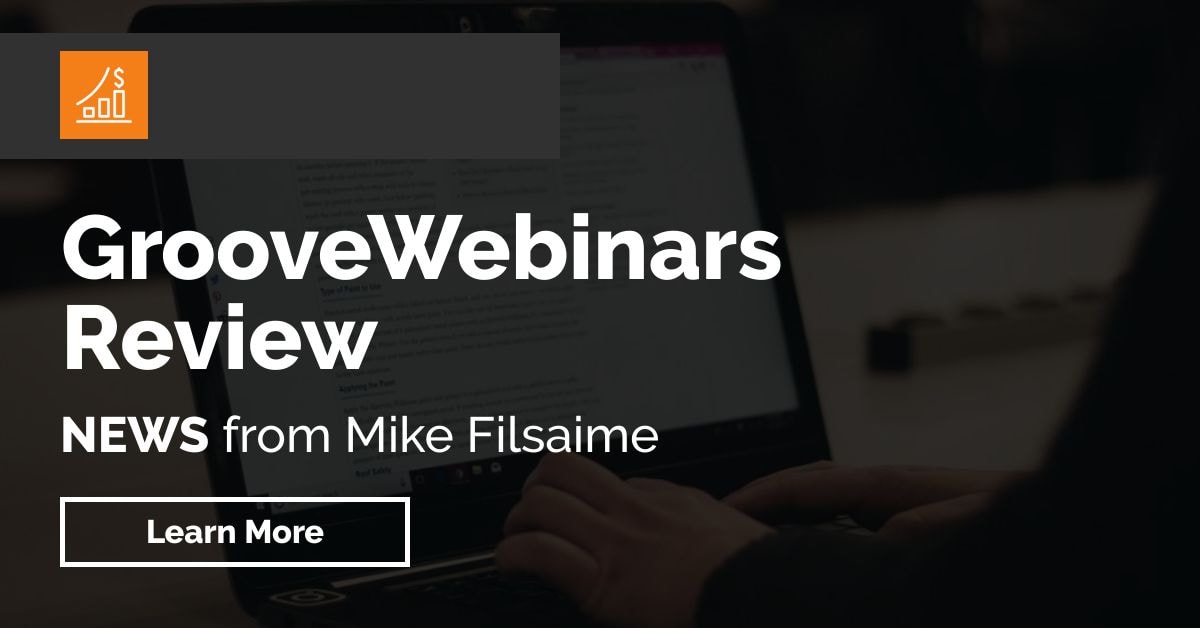 GrooveWebinars (formally called WebinarGroove) is a new webinar software developed by GrooveDigital, and Mike Filsaime who created WebinarJam and Everwebinar.

With GrooveWebinar, you will be able to host automated and live webinars and believe it will be the best WebinarJam alternative once the software is released.

When will GrooveWebinars Be Available?

GrooveWebinar will launch later in 2020.

Right now, you can get early access to GrooveWebinars as part of the beta program of GrooveFunnels, which is a software suite that will consist of 11 different software tools to run your entire online business.

The GrooveWebinars Timeline (as announced by Mike Filsaime)

GrooveWebinars will launch after the development team is satisfied with GrooveMember, GrooveVideo, GrooveMail, and GrooveSell.

Right now, the plan is to start with automated webinars because most marketers are content to use GoToWebinar to host live webinars right now.

That’s because online marketers to automate their business and generate passive income.

Right now, the team around Mike Filsaime already has a UI kit, a calendar, all that type of stuff.

The development team has done most of the code written already.

In a recent webinar, Mike Filsaime announced that GrooveWebinars is 70% ready but was postponed after getting customer feedback.

Because they are working hard on GrooveVideo, and they spent so much time they have choosen to host the webinar videos your on their GrooveVideo platform.

What’s left is after the email sequences to set up all the integrations and the online wizard.

For this, GrooveDigital will use elements right out of GrooveSell. Because they created an all-in-one Marketing software, this process is very, very simple for them.

They have tags where it says go to this email, list all that stuff.

To create your webinar registration, you’ll get access to GroovePages. Then you choose a webinar funnel with a landing page.

Then you will click on the web form, and then click Configure, and drop down to GrooveWebinars choose your webinar and boom, the form is done.

How To Set Up Your Webinar Funnel In GrooveWebinars?

Here’s what’s important. You can design your Thank You Page, but there’s an element on the thank you page that cannot be deleted, it is a block.

And if you try it says this cannot be deleted.

That element or you can’t use it later in GrooveWebinars.

Because it says, “Hey, your page, your thank you page is missing a crucial element. And the crucial element is basically the dynamic part that says, the webinar starts on this date. Here’s your link.”

Then you have another page called upsell that you can select in GrooveWebinars, which will ask you, ”Do you want an upsell or not?”

In GrooveWebinars, all of these templates will be designed for you with some necessary limitations.

You can design all the pages, but what the webinar replay page?

It has a video you cannot remove.

What Is the Webinar Lobby Going to Look Like?

The lobby has a block that you cannot delete the countdown timer, which will handle the redirect function, all that stuff kind of like iframe technology, right?

Once GrooveWebinars is ready, the next step in the process is saving.

GrooveWebinar groove will not create the pages for you.

You will create the out of a template in GroovePages.

And then you will have a dynamic block like add to the calendar, choosing the time, all that function, but you will be able to design and add your header, your footer, your Terms of Service, etc.

GrooveWebinars vs WebinarJam and Everwebinar

GrooveWebinars will only restrict like editing for specific elements and the deletion of certain elements.

Bacially this means you select a template with pretty much everything auto filled in there.

For example the webinar host, the date, the time, etc

You will be able to edit it, change the colors or customize it, but you won’t be able ever to delete these elements.

Maybe if you accidentally do break something, you will get a notification that you detected something and be able to hit a reset button.

You cannot move any elements out of the block. And any crucial elements you cannot delete, but you can style them or add additional elements, like your logo and anything else that they want in that block.

Maybe you will prefer an element on top of the block above it and below it.

This means the GrooveWebinar Registration Pages will be much more flexible than registration pages from competing software products like WebinarJam or EverWebinar.

Will Groove Launch Earlier Than Expected?

In a call Mike Filsaime published in the GrooveDigital Facebook group, he mentioned that not everybody needs a live webinar platform.

What most marketers want is the automation of an automated webinar.

Is there any way that automated webinars could come quicker?

And then when he started typing to someone asking about that his first reaction was:

But then he paused and thought:

“Wait a second, let me just not answer this guy right now.”

He takes a shower and starts thinking about the page builder.

He is starting to realize GrooveWebinars is almost done once GrooveVideo is done.

They have the entire UI kit because of GroovePages.

And that means 80% of the app is done when GrooveFunnels launches.

And the chat can even be simulated.

During the call, Mike said the first version of GrooveWebinars could go live without a simulated chat.

To make automated webinars available for you even faster, they might roll out the chat feature later.

How much does GrooveWebinars Cost?

GrooveWebinars will cost $299/month and will be part of the GrooveFunnels Platinium Pricing Plan. There may be an option to buy GrooveWebinars separately but this will be announced when the software launches officaially.

However, you will get life access to GrooveWebinars for free when you join the GrooveFunnels beta program.

Groove Webinar is not for sale right now. However when you join the GrooveFunnels beta program you’ll not only get get a better software than ClickFunnels or the Kartra which will cost you $297/month but lifetime access to GrooveWebinars for free.

The GrooveFunnels beta program is available for just 3 payments of $497.

You’ll not only get access to the best sales funnels software in the world but on top of that you’ll get the BRAND NEW webinar software from the creator of WebinarJam AND Everwebinar for free.

Who Should Join The GrooveFunnels Deal?:

If you like the idea to dominate your competition by simply importing ANY page on the web by pasting the URL into GroovePages you will find this the best offer ever.

You not only get the webinarsoftware for free (this will be a separate product when GrooveFunnels launches in June) can se Groovefunnels to execute any webinar funnel or viral marketing strategy.

This means you never pay for something like EverWebinar or WebinarJam ever again. .

This offer is good until the end of April 2020.

To make this an absolute no brainer I’ve put together a special bonus package for you.

You can claim your deal right now before it’s gone!

(on a page build with GroovePages)